I went to South Africa (Cape Town) on my mission. It is an English speaking mission. I bought a tape from the mission office that had some basic Afrikaans terms. Among them was a simple prayer. It was really simple. It was your basic â€œOur Heavenly Father, we thank Thee for our many blessings. We ask Thee to bless us with thy Spirit. In the name of Jesus Christ, Amen.â€

On the a couple of occassions when Afrikaans families would ask me to say a prayer, I would use that prayer. Sometimes they I would add a few words in English, but that prayer was normally sufficient and the family would be surprised and delighted that I took the effort to learn to pray in Afrikaans.

One of my fondest memories was about 2 – 3 months into my mission. I baptized a 17 year old young Afrikaans speaking girl. The day of the baptism after a dinner appointment at a member’s home, the father of that house suggested I say the prayer in Afrikaans. He wrote it all down for me and I had about an hour to learn it beforehand.

I shocked everybody (except my companion and the witnesses) when I said the baptismal prayer in Afrikaans. I was sure nervous but I was told I sounded fluent the way I spoke it.

In case you’ve read my other post, this was Emily’s daughter that got baptized. This was another big part of your progression toward the waters of baptism. She was crying after the baptism and said she had never felt that good inside before.

Its somewhat funny because as a teenager I prayed that I would go somewhere foreign yet English speaking. (I really struggled in Spanish class). I have no regrets about where I went. I definitely wouldn’t change that. But sometimes I kind of feel like I missed out because I’m not fluent in another language. Yet I did pick up a lot more Afrikaans & Xhosa than I ever thought I would.

After completing our Stake Presidency’s challenge to read the 5 gospels (Matthew, Mark, Luke, John, 3 Nephi) by September 1st, 2005, and President Hinckley’s challenge to read the Book of Mormon by the end of the year, I’ve decided to issue myself a challenge. In light of the fact that we are studying the Old Testament this year in Sunday School and the fact that it is the only book of scripture I have yet to completely read, I’m going to challenge myself to read the entire Old Testament by the end of the year. My wife is going to do it with me, which will be a fun experience.

I found it useful to track my daily progress with an excel spreadsheet for the other two goals, so I’ve created this spreadsheet to help me with this goal.

Click the image below to see a larger view:

Before I tell this story, let me preface by saying I’m a terrible singer. I don’t feel bad about that, because I’ve never really liked to sing. I don’t listen to music often for that matter. When I was a teenager, we were asked to volunteer to sing as a stake youth choir for an upcoming Stake Conference. I fulfilled my duty by going. During practice they moved me to new seats a few times probably hoping to minimize the sounds that were coming from my direction. When the the first practice was over I asked what time the next practice was, and was told they had enough people and I really didn’t need to come back if I didn’t want to. They continued to ask for volunteers the following weeks. Don’t worry, I wasn’t offended in the slightest!

Now, to a mission experience. I had learned in MTC and Missionairy Training Manual that hymns were a great method of inviting the spirit. Some time within my first few months of my mission, were were visiting and investigator – Emily. She was visibly upset when we arrived. She had decided to be baptized but was not able to quit smoking. She said she wanted to give up and asked us not to come back anymore. We had dealt with previous episodes and went throught the usual routine of comforting here and giving her encouragement. This time, nothing we could say seemed to be of any use.
END_OF_DOCUMENT_TOKEN_TO_BE_REPLACED

My mother-in-law gave our daughter an early Christmas present last night. It was a Little People Nativity Set. I think part of the reason was to keep the grand-kids from playing with her fragile nativity set. Early this morning my daugher had it all set up on the family room floor with everyone staring at baby Jesus. 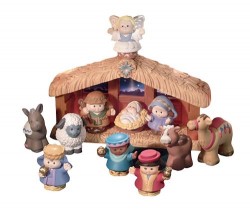 I noticed while trying to find a picture of the nativity set online that it was sold out already on Amazon. That’s pretty impressive! But if you’re dying to add to your children’s Little People collection. You can always give them some Mini Missionaries. 😀

This is a cool video showing the growth of the church by stakes throughout the world. I know that from experience from members in South Africa, it can be difficult to get a stake. 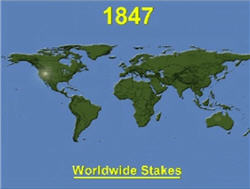 END_OF_DOCUMENT_TOKEN_TO_BE_REPLACED

Since Times And Seasons coined the term “Bloggernacle,” I would assume it safe to say we are now part of it since Kaimi was so quick to respond to my email and add us to their blogroll. Thanks Kaimi!

My friend send me this classic Cheers segment:

Click the image below to watch the video segment: 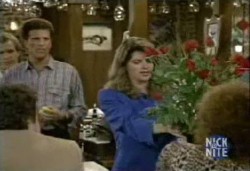 I was reading in Ether 10:11-12 this morning and I just couldn’t help but think of President Clinton. I was in South Africa on my mission during the whole Lewinsky escapade. It was an embarrassment to America. But I know a lot of Americans loved Clinton because our economy was so good at the time. I remember watching President Hinckley on Larry King Live state that Clinton was a very talented man, but he has some morality issues he needed to work out. Do we have modern day Morianton?

11 And he did do justice unto the people, but not unto himself because of his many whoredoms; wherefore he was cut off from the presence of the Lord.
12 And it came to pass that Morianton built up many cities, and the people became exceedingly rich under his reign, both in buildings, and in gold and silver, and in raising grain, and in flocks, and herds, and such things which had been restored unto them.

This is one of my favorite quotes I found in The Miracle of Forgiveness:

Strength and struggle go together. The supreme reward of struggle is strength. Life is a battle and the greatest joy is to overcome. The pursuit of easy things makes men weak. Do not equip yourselves with superior power and hope to escape the responsibility and work. It cannot be done. It is following the lines of least resistance that makes rivers and men crooked.

I am nearly to Alma, the big book. This section of the Book of Mormon always reminds me of a webpage I wrote back in 1999. It is an interesting look at some numbers in the Book of Mormon. Feel free to check it out here: http://dustin.davisvillage.com/BOMthoughts.html
See more progress on: Finish the Book of Mormon by the end of the year
Latter-day Blog
Proudly powered by WordPress Theme: Twenty Fifteen Child.